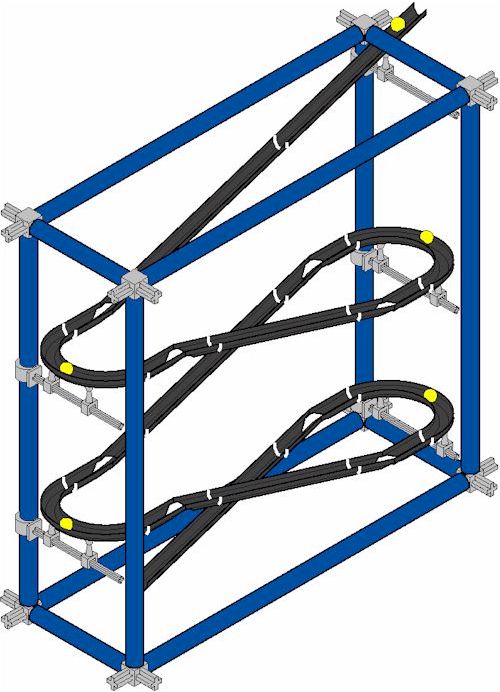 Build the top section of track first. It has three parts: a long straight, a flex-track, and a 180-degree turn, in that order.

Now build four identical sections of track. Each section has four parts: a flex-track, a short straight, a flex-track and a 180-degree turn, in that order.

Now add a flex-track and a long straight at the very end of the course.

Test each 180-degree turn to see that it is level. Place a ball in the middle of the turn. If it stays put, the turn passed the test.

When all the turns are level, place one ball on each turn.

Surprise! The ball you released started a chain reaction, making each ball move down one level. Why? Because energy can be neither created nor destroyed. It has to be transferred or it has to change forms, or both.

Where did the first ball get the energy that made the second ball move? Gravity is pulling all the time on both balls. When you released the ball at the top of the course, the many forces acting on it were no longer in equilibrium – they were out of balance. So something had to happen. What happened was that the ball began to move in response to the pull of gravity. Before you released it, its energy was potential energy – the energy of an object that has a distance to fall. When the ball began rolling, that potential energy started to become kinetic energy – the energy of motion. This was the energy that was transferred to the next ball.

1. As soon as a ball reaches the bottom, grab it and place it at the top again to keep the energy moving.

2. Add the chain-lift (and a few sections of track) to do the heavy lifting for you.

3. If you have more than six balls available, start a new ball at the top as soon as the first ball hits the second ball. Can you keep balls in motion on very section of track?

Let’s do some measurements to estimate how much energy is lost as the ball travels down the track.

First, let’s calculate the energy of a ball that simply falls. Using the equations from the physics tutorial for potential and kinetic energy:

The speed is computed using the formula:

Put in your distance (in meters) and time (in seconds) to compute the average speed of the ball along this final piece of track.

Now we can estimate the kinetic energy of the ball using the formula above.

Compare the energy of the rolling ball to that of the falling ball? Which has more kinetic energy? Are you surprised at how much energy was lost along the way? (By lost, we mean converted through vibrations and friction into heat.)

This isn’t a perfect result. It’s just an estimate. See the last exercise to learn where we lost some accuracy!

1. Whenever you push on something, it pushes back. What’s pushing back on you right now?

1. Compare the energy lost as the ball rolls down the track to the energy lost when you walk down a flight of stairs. When you’ve reached the bottom of the stairs, how fast are you going? (Not very fast – at least I hope not) What would happen if none of the energy was lost (or dissipated) as you walked down the stairs?

Answer: You would be moving very fast and would probably get hurt when you reached the bottom and collided with the floor!

1. In measuring the kinetic energy of the rolling ball, we measured its speed. We didn’t measure all of its kinetic energy, however. Can you figure out what energy we forgot?

Answer: The ball is rotating, and we didn’t count the energy that this requires. So the ball actually has more kinetic energy than we computed.

You can use what you learned from energy stealer in your own projects. Build some level track between some steeper sections of track. Then place a ball on the level section and predict what will happen when another ball hits it.