On an Old West trail, the cook’s flapjacks flip and fall.
On this course, the ball tells all.
That tale’s not tall!

Challenge: Make a hinge for a circle of track. 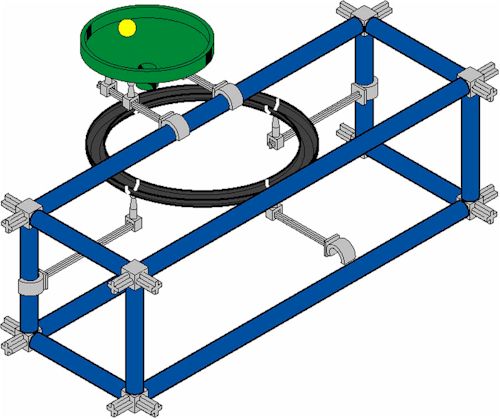 Note that the “handle” is not connected to the framework!

Place a ball inside the rim of the vortex, and give it a push. When the ball drops onto the track, use the handle to control it. Moving the handle up and down slightly will cause the ball to race around the track. If you time your movements just right, you can make the ball go faster and faster!

The ball begins to move as soon as one section of track is lower than another section of track. Remember how gravity is always working on an object, whether it is moving or not? The ball will find the bottom of even the smallest hill, as long as it can overcome friction. On this circular course, the only two places that are never “down” are where the adjustable ball joint supports are attached. But, once the ball is moving, momentum carries the ball right over the top.

We’re going to learn to measure how fast you can make the ball go. For this you’ll need a stopwatch.

First, practice making the ball go around as fast as you can without it flying off the track. What do you think you would need to know in order to compute how fast it is going? You’d need to know how long it takes to go around the track, as well as how long the track is.

We’ll measure each each of these things and then combine them to compute the speed of the ball.

How long does the ball take to go around the track?

How long is the track?

We’re going to compute this two ways. First, take a ruler or tape measure and measure the distance around the track. Write this number down.

Now, simply measure the distance from one side of the track to the other. We call this distance the diameter. Now multiply this number by 3.14, a special number mathematicians call Pi (pronounced “pie”). Believe it or not, this is equal to the total circumference of the track. We’re going to use this value.

To compute the speed we just need to divide the distance by the time.

Velocity = (distance around track)/(time to go around once)

Compute the speed of your ball. How fast can you make the ball go?

If the ball is moving around the circle at a relatively constant speed you may think it isn’t accelerating. Since it isn’t speeding up or slowing down, how could it be accelerating?

It’s just equal to the square of the speed divided by the radius of the circle. Proving this is very difficult, so we’ll just believe the physicists on this one.

Using your speed from stage II, compute the centripetal acceleration of your ball!

Answer: Eventually it will slow down to match the speed at which you move the track. When you raise and lower the track you are supplying what scientists call a driving force. The speed of the ball will change depending on the driving force.

1. Michael Johnson broke the world record for the 200 M dash in the 1996 Olympics in Atlanta, GA, with a time of 19.32 seconds. What was his average speed for the race (in meters per second).

2. What finishing time would someone need in order to have an average speed of 11 m/s?

Answer: we can use the rules of algebra to rearrange the formula to solve for the time.

You can use what you learned while building Flapjack in your own projects. Try adding a circle make of 90-degree turns with a “hinge”, or handle made from adjustable support.