The genius of the telescope also turned his gaze to a gentle slope:
An inclined plane of his own invention,
To which all good physicists now pay attention.

Challenge: How to decide when the ball reaches the end of the track.

Hint: Instead of watching the ball at the end of the course, listen for it. When it hits the Ball Stop, it will make a noise. That way you can keep your eyes on the stopwatch or clock. 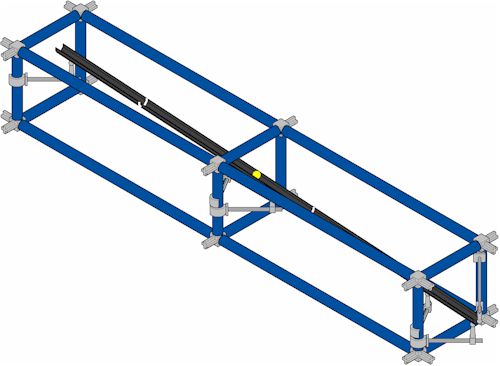 2. On the floor, connect all seven track parts for the course: seven long straights. Then set the connected track aside.

7. Check the track. It should be straight, with a gentle slope and no bumps.

8. Position the Ball Stop. Lower the remaining adjustable support attached at the rear right so that its clip blocks the very end of the course.

Place the ball at the end of the track and release it. Notice what happens as the ball travels down the track. Does it speed up or slow down? The ball moving on the track is a lot like you coasting down a hill on your bicycle!

10. You’re done building. Now find your stopwatch or clock, and ask your friend to place a ball at point A.

11. Have your friend shout “Go!” as he or she releases the ball. Don’t watch the ball. Just listen for the sound it makes when it hits the Ball Stop. Record the time in column for Trial 1 in the Galileo Data Table below.

12. Now repeat step 11 twice more and record the times for Trials 2 and 3 in the appropriate columns of your Galileo Data Table above.

13. Repeat steps 11 and 12, releasing the ball from point B. Make sure to record your data in the table.

15. Before releasing a ball from points G and H, make some predictions about the times you will record. You may want to look over your data table before making your predictions. Record your predictions in the Predicted Time column.

16. Now repeat steps 11 and 12 for points G and H. Make sure to record all of your data in the table. How close were your predicted times?

17. Now fill in the column labeled Average Time in each row of your data table. Add the three times in each row, then divide by three. (You may want to use paper and a pencil or a calculator.)

For points G and H, make sure to add the three times for Trials 1, 2, and 3, then divide by three. (Be careful not to include your Predicted Time in these calculations.)

18. Fill in the column labeled Average Speed. Divide the distance in each row by the Average Time.

You can use what you learned from Galileo in your own projects. For example, if you need the ball to be moving fast when it reaches a certain part of your course, measure the length of the slope above it o help you predict whether or not the ball will build up the speed it needs.

1. Build a steeper track. Before releasing the ball, make a prediction about how long it will take to reach the end of the track. The data from your first layout might help.. After you have tried it, check the results against your prediction. Did the ratio of distance to speed change form your first layout?

2. Repeat Variation 1, but with a shallower track. Now draw a graph of average speeds for different slopes.

3. Try gently flicking the ball up the slope from the Ball Stop.. How much force does it take to reach point C? Point H?

Think of 4 different examples of things moving down a hill that happen in real life (one example already used is a bicycle coasting down hill… can you think of 4 others???)?

What would you expect would happen if you change the slope of the track? How would the curve change with a steeper track? Sketch it.

What would you expect a curve to look like if you attached a shallow sloped track to a steep track? Sketch it.

“Check it out for yourself”–this could have been a motto for Galileo, and Italian astronomer and physicist of the late 16th and early 17th centuries. By looking at nature firsthand, Galileo found that many commonly accepted ideas of his time weren’t right after all.

Up until Galileo’s time, most people thought that heavy objects fall faster than lighter objects. Galileo wanted to test this. So he observed how quickly objects of different density sank in water and dropped through the air. Because the velocities at which the objects fell differed less when dropped through the air, he then reasoned that the same objects dropping through an airless chamber would fall at the same rate. Later, he used an incline plane to discover the law governing how objects fall.

Galileo was also the first person to look at the sky through a telescope. He discovered the rings of Saturn, the moons of Jupiter, and sunspots on the sun. He also saw that through a telescope, the planets appear as round circles, not as small points of light. Galileo helped people understand that the sky was much more interesting and complicated than they had thought.