“Disappear!” said the ball to the ball.
But which dissolved which?
That’s the riddle to solve.

Hint: Instead of allowing the track to rest on the floor, make it hang between the track frameworks. This will give it a shape more like a jump rope.

Build two frameworks and some track that look like this: 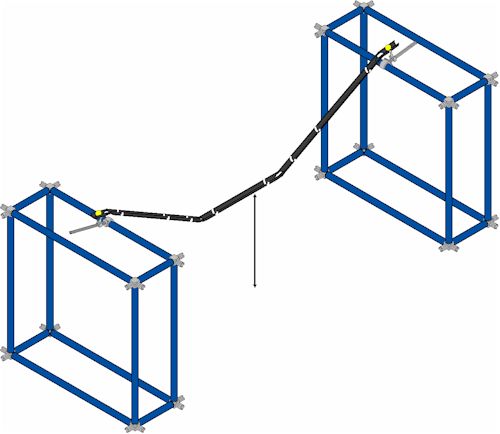 Place the track frameworks about 2½ feet apart, and make sure the center of the track is a few inches off of the ground.

You’re done! Give your friend one ball and take the other for yourself. Place a ball at each end of the track. On the count of three, release the balls.

Keep your eye on the center of the course. Don’t blink!

When the track hangs between the track frameworks, it begins to take the shape known as a catenary curve. This shape is familiar to bridge builders and double-dutch jump rope champions. A jump rope held by both ends off the ground naturally forms a catenary curve. Bridge builders use the strong properties of this curve to set the cable that holds up a suspension bridge. If you look at this kind of bridge from the side, you can see the jump rope shape of its main cables. Even though it looks “upside down”, another example of a catenary curve is the Gateway Arch in St. Louis.

There’s nothing ghostly about this activity. One ball may appear to move through the other. In fact, when the two balls collide, they both reverse direction.

There are two ways of looking at what happens when the balls collide. Physically, both balls are squeezed together slightly during the collision. They then rapidly expand back to their original shapes, pushing against each other as they do. This reaction force from both balls causes both balls to move away from each other.

Another way to describe what happens is to say that just before the balls meet, both balls have momentum–they are moving in a particular direction and will keep moving until something stops them. Each ball’s momentum is about the same, but in an opposite direction. That means that if you added them together, the result would be zero (net) momentum. So after the collision, the balls must have the same momentum (zero). Mathematically, this can only happen if both balls stop right where they collide, or if both balls reverse directions. So what makes the balls reverse direction? In addition to momentum, both balls have kinetic energy, the energy of motion. A tiny amount of energy from each ball becomes heat when the balls collide. But most of it remains as kinetic energy, which is transferred to the other ball. The balls keep moving, and because they keep moving, they move in opposite directions.

How can the eye be fooled so easily? Your brain is wired to see patterns, and it tends to fill in what it cannot see. This pattern-making part of the brain is the “magic” behind many optical illusions.

1. Release one ball before the other.

2. Release one ball from the very end of the course and the other ball six inches from the other end.

4. Use three balls, two at one end and one at the other end.

5. Use six balls, four at one end and two at the other.

6. Place one ball on the short straight piece at the center of the track and then release two balls as usual.

If kinetic energy is not conserved, then the collision is called an inelastic collision. A good example of this is when two football players collide. Before the collision, they are both running fast. After the collision they are both laying still on the ground. Clearly the kinetic energy was dissipated. Where did it go? Some of it was absorbed by all of the padding they wear. And their bodies also absorbed some. When too much of the energy is transferred to their bodies it is easier for them to get hurt. This explains why there are so many injuries in football.

Drop a chaos ball onto a hard tile floor and see how high it bounces. Now drop a ball on the carpet. In which case did the ball bounce higher? (the tile floor). Which absorbed more energy in the collision, the tile floor or the carpet? (the carpet)

1. Have a collision where one of the balls is moving faster than the other before the collision. Does it still look like the balls went through each other?

1. Classify each of the following collisions as elastic or inelastic.

An axe and a tree trunk – inelastic

2. Are the collisions between the balls in this experiment completely elastic? The answer is no. Where can energy be lost? In particular, prove that energy is lost in the collision without measuring the initial and final speeds of the balls?

Answer: When the balls collide it makes a sound. The sound wave has some energy and this energy comes from the balls. So the balls can’t have as much energy after the collision as before.

You can use what you learned from Ghost Ball in your own projects. Try to create a clear, open area of track somewhere in your project where two balls can meet head-on. Try to predict what will happen when they do meet. Then try to control what happens.