Can the ball go around a circular track forever without slowing down? The answer is yes… sort of!

Perpetual motion has fascinated inventors for generations. These mythical machines are imagined as devices that, once set into motion will never stop. They are an appealing concept since they would imply a limitless, free source of power.

The first such device was proposed in the 13th Century by the French architect Vilard de Honnecourt and eventually built by Edward Somerset, 2nd Marquis of Worcester (1601-67), and Orffyreus (a.k.a. Jean Ernest Elie Bessler, 1680-1745). Although both machines were dramatic, operating for extrodinarily long periods of time, they did not run forever as they were touted.

The laws of thermodynamics explain the error in the concept of perpetual motion. Simply put, all “perpetual motion machines” commit one of the following errors:

a. They claim that it takes less energy to return a system to its original state than the energy harnessed allowing it to fall or rotate a body (eg. If a pen that falls to the ground from a table releases more energy than it takes to pick it up and put it back on the table.)

b. They claim that there is no energy lost converting heat to work.

c. They claim that motion is possible if impeding factors such as friction or electrical resistance could be completely eliminated.

None of these are ever the case. (A full discussion of the laws of thermodynamics is beyond the scope of this exercise).

So, can a ball go around a track forever without stopping? Let’s find out! 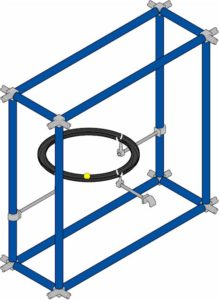 Place the ball on the track and move the handle make the ball move. Can you make the ball go around and around in a circle? If not, try moving the handle up and down in a regular rhythmic motion. What’s going on here? Why does it work? Have you ever seen anything like this before? The answer again is YES!!!

When you ride a swing you kick your legs at the same time on each swing. Have you ever thought about why you do that? You just know from experience that if you move your body a certain way at the same point on the arc each time, you can swing higher and higher. What you are really doing is adding energy to your motion each time you kick your legs. Really small children can’t do this by themselves yet, so their parents push them to give them the extra energy. If someone stops pushing them, they will slowly lose energy and come to a stop.

The same thing happens to the ball. If you keep moving the handle up and down, the ball keeps going. This is what engineers call “driving” the system. If you stop, the friction of the ball on the track will slowly dissipate the energy of the ball and it will come to a stop.

Is this an example of perpetual motion? The answer is NO! By moving the handle rhythmically up and down, you are putting energy back into the system that is being lost to friction and heat in the track. So, yes, it is possible to get a ball to move around a track forever… but only if you drive the system to restore the system to its original state after each revolution!

Stage 2: Why does the ball sometimes fly off the track?

Imagine tying a string to a rubber ball and whirling the ball around your head. If you whirl it fast enough and the string breaks, where does the ball go? It flies away in a straight line, just like the ball on the track. The track works like a string holding the ball on the course. But if the ball is moving fast enough, the ball’s momentum can overcome the force exerted by the track on the ball – and the ball flies off.

Get the ball going around the track as fast as you can without making it fly off. Then suddenly hold the track still and count how many times the ball goes around before coming to a complete stop. The longer the ball takes to stop, the slower the energy loss due to friction and vibrations.

Look around your house and find examples of devices that do work without you having to manually run them. Look carefully at them and determine what their power source really is… it might be electricity from the wall (as in your vacuum cleaner), it might be a crank (as in your bicycle… pedals are simply a crank to turn your back tire), and it might be a battery. If you think something is running “perpetually” without outside input, look closer… there is a power source somewhere or it won’t run indefinitely.