If you’ve ever watched a slalom ski race, you know that how the skier maneuvers through the turns is crucial to his/her success. In this activity we’re going to simulate a ski race with Chaos and watch how the balls move through the turns. We can learn a lot about racing by making a few simple observations.

Setting Up a Chaos Slalom Course

To start off, create the following setup. 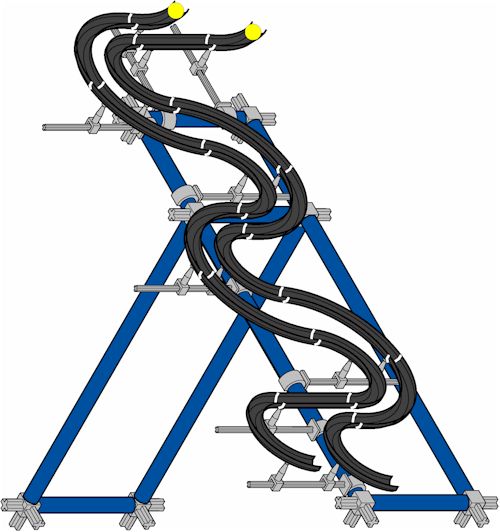 Before conducting the race, it’s important that you think about what you think is going to happen and make a guess as to which track will be faster.

Which do you think?

It’s time to race! Place your two skiers at the top of the course and let start them at the same time. Watch what happens. Which one wins? Does there seem to be much of a difference between the tracks?

The two tracks certainly aren’t identical, but they are pretty similar. Basically, the tracks are the same except that the curves are in a different order. But in the end, each ball goes through two curves in the same vertical drop, so the race will be a close finish.

Some Racing Strategy: How to Go Faster!

We can learn about racing by watching the race. To teach ski racing, a coach will sometimes start by drawing two kinds of curves in the snow with a ski pole. The curves show the racers two possible turns they can make that will bring them around a series of poles in the race course. The first kind of curve is tight. It connects to the other curves with a traverse, a kind of diagonal path across the slope. A racer whose skis follow this curve heads straight for the pole, then turns hard to get around it. The second kind of curve is more gradual. The racer begins her turn farther uphill and ends it further downhill, but she has almost no traverse between turns. Which type of path is faster?

Well, that depends. As a beginning racer, the more gradual turn with little or no traverse is the one she wants. With this approach her skis meet less friction because she can keep her skis from skidding every time she turns hard to go around the pole. Less friction means less of her forward momentum is converted to heat. (This heat actually melts the snow just a little, providing a thin layer of water for the skis to slide on. This actually helps the skis go fast.) Reducing the time she spends traversing means that her skis point downhill for a longer period of time, allowing gravity to accelerate her body for a few extra seconds.

Of course, her coach has another goal in mind for her: to use tight turns to her advantage. As an expert racer, her path will begin to resemble that of the ball coming down either one of your slalom courses – no skidding at all! When she can keep her skis from skidding even in a tight turn, she can then use the extra reaction force of a tight turn to her advantage, increasing her acceleration around the pole. You can see the difference in your Slalom courses, as the ball accelerates through the tight 90-degree turns.

An expert skier will choose a path through the course with very tight turns and will do her best to not skid as she goes around the curves. If she can do this, she has a good chance of winning the gold!

1. A typical ski race might have 20 or 30 racers. They race the course one after another, and the one with the best time wins. Do you think each racer has an equal chance of winning? Think about what happens to the course as more and more people ski it.

Answer: The first skiers have the best chance. This is because as more people ski the course, the snow along the fastest lines (paths) gets packed into ice. This makes it harder to go around curves without skidding. So the last skiers in the race have to ski on a more icy course, which is much harder.

2. A pair of skis is not perfectly straight. The skis are actually wider at the tip and at the end, and skinnier in the middle. Why do you think this is? (Hint: It has something to do with helping the skier turn.)

Answer: When the skier turns around a corner, two things happen. First, the skier leans to one side and only one side of the ski is actually touching the snow. Second, the ski bends up in the front and back. The combined effect is that the edge of the ski actually traces a curve on the snow, which helps it go around the turn without skidding as much.