When the course starts getting hot,
Put a lid on it, right over the spot.

Hint: Plan ahead. Attach the 90-degree turn that ends the course first. As you connect track at the top of the framework, keep your eye on the 90-degree as the place where you want the track to end. 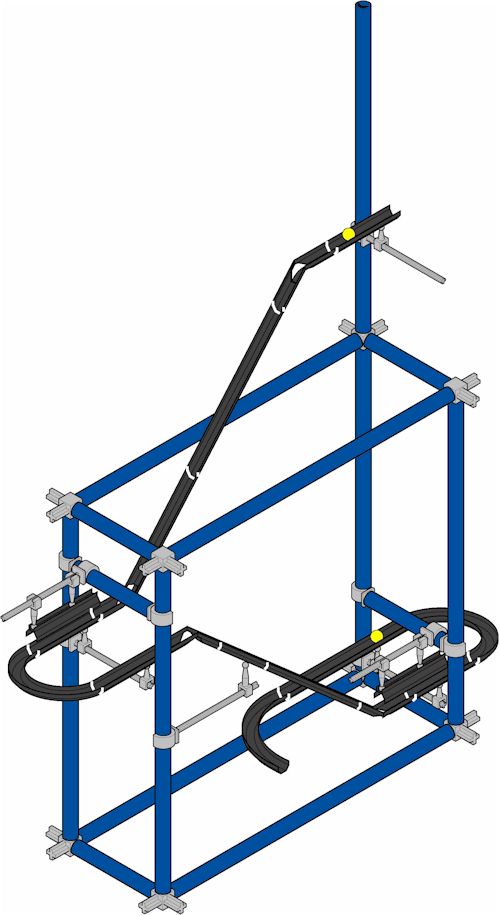 This course has two “speed roofs”. They are upside-down pieces of track used to keep the ball from flying off of the track. These can be helpful in your designs when a section of track is too steep.

Test the course. If the ball gets stuck under a roof, pull it out and adjust the roof so the ball will move easily under it. After some tinkering, you will find the speed roof position that works best to keep the ball moving at maximum speed.

When you tested the course for the first time, the ball did not stay on the track all the way to the end. Why not? On the first section of the course, the ball picked up quite a bit of speed. But halfway through the second flex piece, the course became level again. Here, inertia tends to keep the ball moving in the direction it is going. Because the ball changed direction, we know that another force was applied to the ball. What force? That force was the push of the track against the ball, which became stronger where the slope changed to a level surface. There, a strong reactive force pushed the ball right off the track.

Your speed roof does not prevent the track from pushing the ball around. It simply provides another surface for the ball to bounce against, and its force is positioned to oppose the push of the level track. Though it may be difficult to observe, the ball bounces off the track and off the roof, but it has enough forward momentum to continue around the 180-degree turn and down the rest of the course.

If the ball slows down, that means it lost some energy. Where did this energy go? Some went into the work of pushing the track around. Some changed forms and became heat, and some became noise.

You can use what you learned from Speed Roof in your own projects. If a ball repeatedly pops off a course you built, find the spot it leaves the track, and try a roof. Try speed roofs with different kinds of track: long straight, 180-degree turns, and 45 degree turns.