Build the following setup as shown below. The ball drop should be between 12 and 18 inches above the trampoline. Also, in order to ensure the trampoline is sturdy, we recommend setting it up as shown in the drawing. 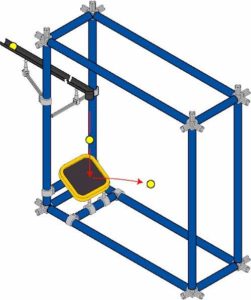 Stage 1: Watch the path of a ball in the air

Put five or six balls on the track above the trampoline and use your finger to keep them from rolling. Let go and watch what happens. The balls should fall and fly off the trampoline one after the other, showing the path they fallow through the air. Place a pillow on the ground to catch the balls on.

You might be saying to yourself, “Wow, that’s pretty cool, but who really cares?” Well, I’m here to tell you who cares. First, baseball players care a lot. Those outfielders have to be able to guess where the ball is going to land when it’s been hit in the air. They get very good at watching the balls path and can tell almost exactly where it’s going to land as soon as it has been hit.

You may have heard of Newton’s laws. They’re some scientific laws that help explain how objects move. They help explain the motion of just about anything you see that moves. Well, a few centuries ago when Sir Isaac Newton came up with these laws, they needed to test them to see if they really worked. One of the most simple applications of these laws is to predict the path of a ball traveling through the air. People have tested this and the laws work just great at explaining this path. In fact when engineering students take their first physics course in college, this is one of the first things they learn.

Stage 2: Some things to look for

Here are some things you can change and watch for to learn more about the path of the balls:

Pay attention to the horizontal/sideways speed of the balls. What do you notice about the speed? Is it always the same or does it change as the ball travels. (It should be constant.)

Stage 3: Can the catapult clear the city wall?

General Joe and his army are laying siege to the city of Tussin. It’s been a standoff for 3 months, with Joe and his army surrounding the city and trying to wait them out. Tussin is surrounded by a large wall 50 meters high going all around the city. The wall has kept Joe and his army from attacking.

Engineer Eddie, one of the smarter people in Joe’s army, just created an invention he has named the “catapult.” General Joe is very pleased with Eddie’s invention, but wants to know if it can launch rocks over Tussin’s city wall. Of course, they could just try it, but Joe is worried that it will make him look bad if it doesn’t work on the first try. He tells Eddie he has three days to determine if the rocks can clear the wall.

Eddie has conducted some experiments and found that the catapult can launch rocks a distance of 100 meters. He has also measured that the initial launch angle of the rocks is 50 degrees. Now Eddie has come to you for help after hearing that you are friends with some guy named Newton and that you can use math to predict the flight path of large rocks.

If you can tell Eddie whether or not the rocks will clear the wall, you will become an elite member of Joe’s Army Corps of Engineers. If not, you will be feeding the hogs for the rest of the siege. Below are a few equations to help you out. First, use your Chaos set so convince yourself that the equations work, and then use them to determine if the catapult can clear the city wall. Good luck! (Remember, your job is on the line!)

The equation for the path of a ball (or rock) traveling through the air is:

where theta is the angle of the ball from horizontal and v is the speed of the ball immediately after bouncing off the trampoline. Also, x is the distance in meters. If we know these two things we can compute the height of the ball for any horizontal distance x. However, we don’t know the initial speed of the ball, and it would be very hard to measure it. So we’re going to do something a little bit different.

We can use this formula to find out what v is. Drop a ball and measure how far it travels before hitting the ground. This is x. (If you want to be more precise, measure the distance where the ball is at the same height as the height as where the ball strikes the trampoline.)Use a clear plastic protractor to estimate the angle, theta, of the ball immediately after leaving the trampoline. Plug these into the formula and solve for v.

Now we know theta and v so we can find the height y for any distance x. We want the height where the ball is the highest. If you watch the ball as it travels you can see that this is at about half the distance from where it lands. In fact, that’s exactly right. Plug in half of x into the first formula and the resulting value of y is the maximum height of the ball.

How does this calculated value compare with the value you measure as the maximum height? Do they agree fairly well?

Now, use the formulas above to tell Eddie whether his catapult can throw rocks over the city wall, or whether he needs to build a bigger one.

Stage 3: Can the catapult clear the city wall? (Quantitative Calculation)

Since 29.7 is less than the 50 meter wall, tell Eddie that he needs to build a larger catapult.

Try playing trash-can basketball. Crumple up a piece of paper and try to throw it into a garbage can across the room. How does the distance that the ball travels on the path that the ball takes? Try moving the basket closer and further away. Do you have to throw harder to get the ball to fly farther? Why?

One of Eddie’s pals invents a radar speed gun. Using this, they find that on a newer catapult, the initial speed is 55 m/s and the launch angle is 55 degrees. What is the range of this catapult?

For the catapult in problem 1, how high is the rock after it has traveled a horizontal distance of 150 meters? Do you think this catapult could clear the city wall?