What do you think a cowboy thinks about when he’s riding off into the sunset on the prairies of Oklahoma? The cattle he’s driving down to El Paso? The Indians whose teepees he sees off in the distance? His cowgirl waiting for him back at home? Physics? Chances are he’s not thinking too much about that last one. But when it comes time for him to whip out his lasso, a cowboy has no choice but to stop thinking like a hero of the Wild West and to start thinking like a physicist.

Have you ever really watched a cowboy spin a lasso? He starts out with the lasso pretty small. He spins it around and around until the rope tightens into a nice, fast-spinning circle. Then he lets out the rope, little by little, making the lasso bigger and bigger. And something else happens: the lasso starts going slower and slower. You’ll see the same thing when you watch figure skaters spin around in a circle: the farther out their arms reach, the slower they spin. You may not have a lasso or ice skates handy, but you can use the Chaos toy to do a little spinning yourself, and learn some physics in the process!

Here are the materials you’ll need:

Assemble the 4 long tubes and 4 short tubes into a ladder shape, and snap an accessory connector onto the center of each rung of the ladder. 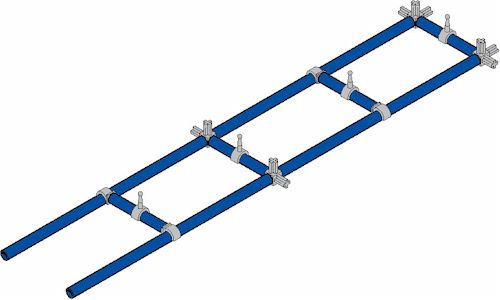 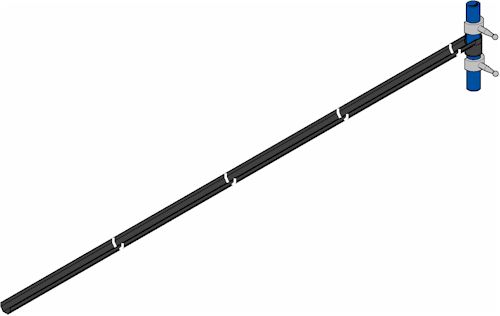 Snap the track onto the ladder and you’re done! 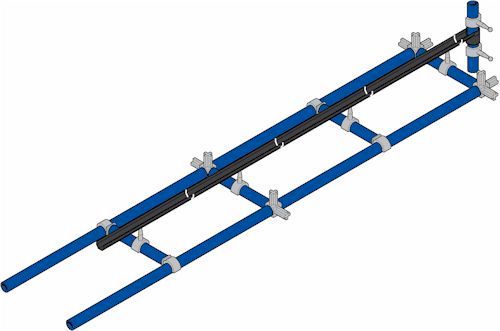 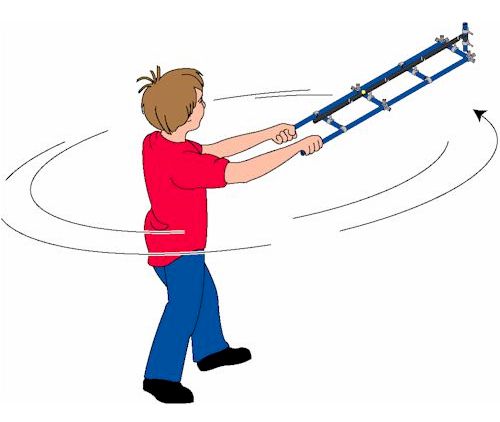 Can you keep the ball near the farthest rung of the ladder without it hitting the end of the track? Practice this until you can do it consistently. You have two ways of controlling where the ball is: you can rotate either faster or slower, or you can tilt the ladder more or less. One word of caution: you’re going to be pretty dizzy when you stop spinning! Make sure you’re ready for it!.

Now let’s think a little more carefully about what is going on. First of all, if you’re spinning around with the ball holding steady somewhere in the middle of the track, and then you start spinning faster, what happens? The ball should shoot to the end of the track. If you slow down, what happens? The ball should come towards you (and fall off the track if you’re not careful). What if you tilt the ladder up more? Then the ball will come towards you. And if you tilt it up less, it will go away from you.

Now let’s be a little more precise. You’re going to have to spin around keeping the ladder tilted at the same angle. So why don’t you start. Spin around until the ball hits the end of the track, and then tilt the ladder up a bit. Now adjust your spinning speed until the ball comes towards you a little, but still stays near the farthest rung of the ladder. Have a friend time how fast it takes you to spin around five times. Now, without stopping, make the ball come towards you a bit more until it’s about halfway down the track. Have your friend time five rotations again. Then allow the ball to come almost all the way down the track towards your body. Again, time five rotations. Now you can stop. Make sure you don’t try walking immediately or else you’ll fall flat on your face!

Whenever you spin something in a circle, you are constantly changing its direction of motion. In order to change the direction of motion of an object, you need to apply a force to it. If you want an object to go in a circle, you need to apply a force on the object pointing towards the center of the circle. As you spun around, you were making the ball go in a circle, and there needed to be a force to keep it going in a circle. So what was applying the force in this case? It was gravity! Gravity was trying to pull the ball down the track towards you just like it pulls a car down a hill. When the ball didn’t move up or down the track, it was because there was just enough of the force from gravity to keep the ball going in a perfect circle. The amount of gravity pulling on the ball depended only on how much you tilted the track, not on how close the ball was to you. That’s why you were supposed to keep the ladder tilted at the same angle.

Below is the equation that tells us how much force it takes to keep an object moving in a circle:

In this equation, Mass is the mass of the object (the ball in this case) and Force means the force pulling the object towards the center of the circle (which was gravity in this case). Omega is a word that physicists use to describe how fast an object is rotating. Radius means the distance between you and the ball.

If you keep the track tilted by the same amount, then the Force will always be the same. Let’s say that Force=16 (to keep it simple, we won’t use units). We’ll also say that Mass=1. The only two variables remaining are Omega and Radius.

Now let’s say that you were spinning with the ball at a Radius of 4. Then solve for Omega:

Okay, now let’s say that we’re going to decrease the Radius from 4 to 1 (like when you let the ball come closer to you).

Notice that when you decreased the Radius from 4 to 1, Omega increased from 2 to 4! That’s why you had to spin faster as you let the ball come closer! It’ll also work the other way around: if you increase the Radius, you can decrease the Omega.

We’ve learned that, the closer the ball is to you, the faster you have to spin in order to keep it from falling off the track. Yet in order to get the ball to come towards you in the first place, you have to slow down. So if you want to move the ball from far away to close in, you need to first slow down and then speed up! It’s not a very easy thing to do, is it? That’s why you have such a hard time keeping the ball in one place. This is called an unstable system. Another example of an unstable system is when you balance a broomstick on your palm. You can do it, but it takes constant attention and concentration.

When you ride the merry-go-round at the carnival, do you feel more force pulling on you if you ride close to the center or close to the edge?

You feel more force if you’re closer to the outside edge. In this case, you’re moving faster and the force it takes to keep you moving in a circle is greater.

Suppose you are spinning at a constant velocity so that the ball is not moving closer to you or farther away from you. Now the track is suddenly tilted to that it is steeper. Will you need to spin faster or slower in order to keep the ball from sliding on the track?

You will need to spin faster. Try it and see!

Little Joe’s dad won’t let him rope the pigs out back with his lasso until he shovels the hay. Little Joe isn’t a very obedient kid, so he goes to his room to play with his Chaos toy instead of shoveling hay. I guess he figures spinning a ball around on a track will teach him a thing or two about lassoing pigs. He builds the track and starts spinning it around at an Omega of 10. The ball is holding steady on the track at a Radius of 5. Now Joe decides that he’s a little tired and slows down to an Omega of 5, while keeping the ladder tilted at the same angle. At what Radius will the ball be able to hold steady now?

Method: first find the amount of force pulling the ball towards the center.

Now you know that the Force equals 500*Mass. Omega changes to 5. Just solve now for Radius:

When Joe slowed down to half his original speed, the radius was multiplied by four.

This one is only for advanced students:

When Joe is spinning at an angular velocity (omega) equal to 10 radians per second, and the radius of rotation of the ball is 0.5 meters, what does the angle of the ladder have to be to keep the ball steady?

So the Force has to be 50*Mass newtons

That’s a pretty steep track! Maybe Joe should slow down a little…