The Power of Machines – Daedalus Style

On a Saturday morning in April of 1988, Kanellos Kanellopoulos took off from the island of Crete in the Mediterranean Sea and flew his airplane 74 miles to the volcanic island of Santorini, skimming only 15 feet above the water. He tried to land his airplane on a beach, but crashed into the waves just before reaching ground. Luckily, he was able to swim to shore safely. Was his flight a failure? Not at all! Kanellos had just made history.

So what was so special about this flight? Well, for starters, the airplane Kanellos was flying had no engine! He was providing the power himself – by pedalling just like you would on a bike. Kanellos was very good at pedalling, so good that he won 14 Greek national cycling championships. It’s a good thing, too, because he wouldn’t have made it without being a fantastic athlete. You see, even with Kanellos pedalling almost as hard as he could, he wasn’t nearly as powerful as a normal airplane engine. In fact, it would take about 500 athletes as strong as him in order to equal one average airplane engine! Fortunately, his airplane was made to fly using only the power from one person’s legs.

This airplane was called the Daedalus, named after an ancient Greek hero who, legend has it, flew across the very same stretch of sea using wings built out of feathers and wax. We know that this didn’t actually happen because there’s no way a person could fly like a bird. Our arms just aren’t strong enough. But the airplane Kanellos was flying used some special tricks that made it possible for it to fly with only the power of one human being.

First of all, it was very light. That made it easier for Kanellos to get off the ground. Even though its wings were over 100 feet long, the airplane weighed less than 70 pounds – that’s less than all the pillows on a 747! Another trick the airplane used is that it went very, very slow. It took Kanellos four hours to go 74 miles. That means he was going less than 20 miles per hour. Some people can run that fast! But Kanellos was willing to make a trade-off: he was willing to go slow if it meant he could fly. Just like with the Daedalus, we’re going to use the Chaos toy to show how you can do a job that you think might be impossible, simply by going slow.

Here are the materials we’ll need:

a clock or stopwatch

Assemble the tower as shown. Note that one long tube is missing on the middle level. This is because we don’t want that tube getting in the way of the rising weight. 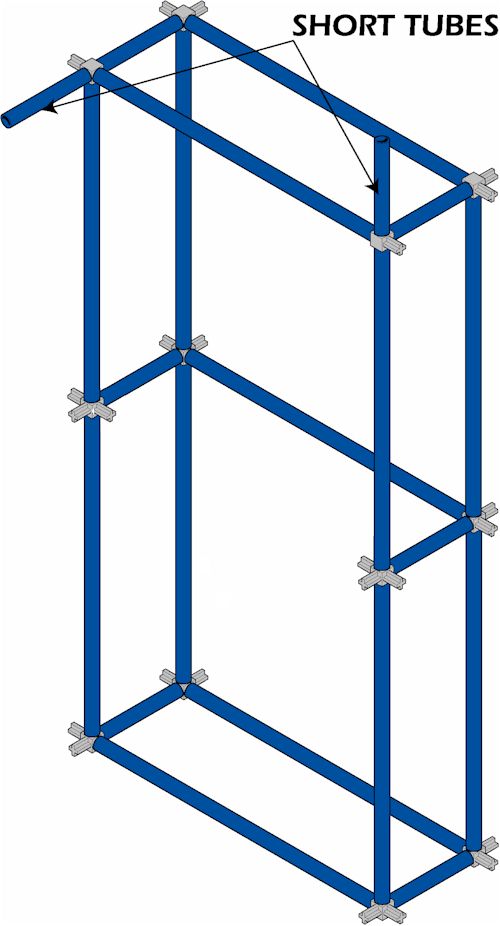 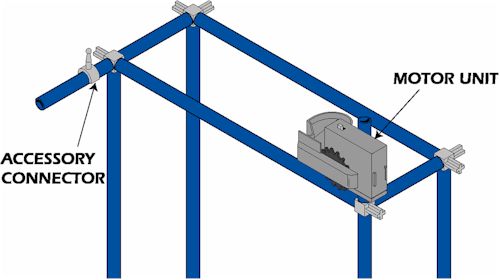 Now we will make the weight that the motor unit is going to lift. Start by attaching the two grey clips to the sides of the pulley. Snap a short tube into each clip. Now put an adjustable support on each tube and slide two short clips onto each adjustable support. Make the circular track out of the four tight, 90-degree turns and snap the track onto the short clips. You now have a weight that can hang from the chain. You can make it heavier or lighter by adding or removing balls from the circular track. 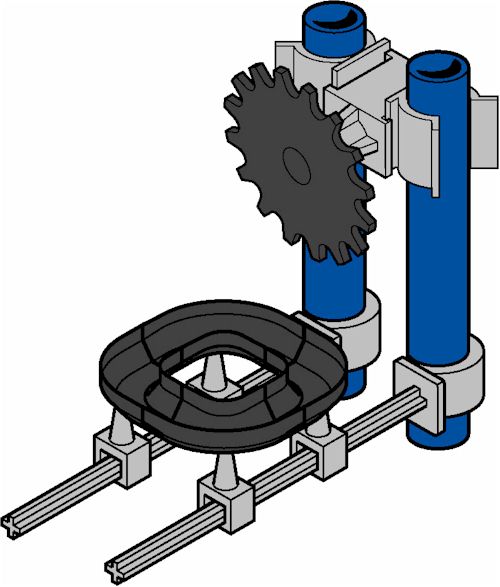 OK, now that we know that our device works, why don’t we give it a name? Daedalus sounds good…

Now let’s see how much weight Daedalus can lift. Try putting just one marble in it. Can it still lift the weight? How about with two marbles? Keep adding marbles until the motor unit can no longer lift it, and record this maximum number of marbles. Note: when the motor unit can no longer lift the weight, it will begin to make an ugly clicking noise. Once it starts to do this, turn it off. It’s not good for the motor to be making this noise for too long.

So now we know the maximum amount of marbles Daedalus can lift. Right? Wrong! We still have some tricks up our sleeve. Remember how Kanellos was able to fly if he was willing to go slow? Well, we can lift more weight with Daedalus if we’re willing to do it a little slower.

How can we make Daedalus lift the weight slower? First, remove the ball carrier from the chain. Now hook the chain onto the accessory connector at the top of the tower. The chain should now be hanging between this accessory connector and the Chaos motor. Now place the pulley on the lowest part of the chain. You have just built a pulley system, or a block and tackle. 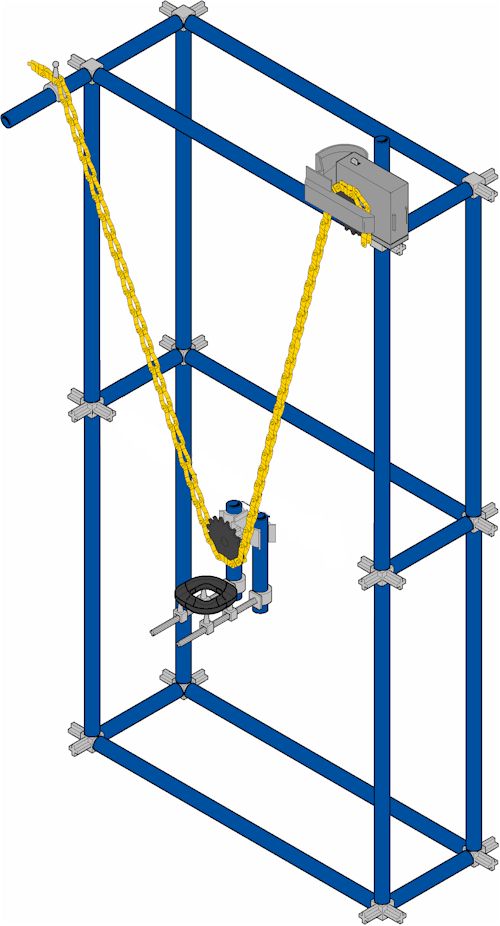 Remove all the balls from the weight carrier and turn the motor on. How long does it take to lift the weight carrier from the ground to the adjustable support? How does this compare to how long it took before? Now start adding marbles. What is the maximum number of marbles it can lift? Is it more or less than it could lift before?

Can you explain why Daedalus took longer to lift the weight after we changed the pulley setup? And why was it able to lift more weight?

There are a couple different ways to explain what happened here. These two ways are explained below. We’ll call the first way “The Tension Argument”, and the second way “The Power Argument.”

In physics, the word power means force times velocity. Power is measured in watts (or horsepower if you’re talking about cars).

In this activity, the power was provided by Daedalus’ motor unit. The force was gravity pulling down on the weight. And the velocity was the speed at which Daedalus lifted the weight.

Daedalus is able to provide only a certain amount of power. When you added too much balls, the motor unit started clicking and not going anywhere because you were asking it to provide more power than it could. So why were we able to get it to lift more weight by changing the pulley setup? Let’s look at the equation again:

We know that we can’t change P. It is a constant which is determined by the motor unit. So the only things we can change are F and V. If we want to lift more weight, then F is going to increase (remember that F is the force of gravity on the weight, which goes up as more weight is added). If F increases and we can’t increase P, then the only way to balance out the equation is to decrease V. To be exact, if we multiply F by two, we have to divide V by two. If we multiply F by three, we have to divide V by three. And so on.

By changing the pulley setup, we were able to divide V by two. Can you see why this is? Let’s say that the motor unit pulls in 100 links of the chain every minute. With the first setup, since the weight was attached directly to the chain, this meant that the velocity of the weight was 100 links per minute, going straight up.

So by changing the pulley setup, we were able to divide the velocity by two. This allowed us to multiply the force by two. That’s why Daedalus could lift more weight the second time around. In fact, it should have lifted exactly double the amount of weight. You can verify this with a scale (remember that you have to weigh all parts of the weight, including the pulley, tubes, adjustable connectors, track, and balls).

What if we were to make Daedalus lift the weight so slowly that it took an hour? Or a day? Or a year? Is there any limit to how much weight it could lift? The answer is no! It could lift a car or a house or an aircraft carrier. It’s just a matter of time. Can you figure out how to make Daedalus lift its weight even slower? Hint: you would need at least two more pulleys.

1.Why are the gears on a bicycle toothed wheels of different sizes? How does this relate to pulleys?

This is very similar to a pulley. By changing the gears on your bike you are able to change the difficulty of pedaling. Basically, the gear selects how far you are going to travel each time you push the pedals in a complete circle. Different gears make you go farther or shorter distances, letting you do the work all at once or a little at a time.

1. We doubled the amount of weight Daedalus could lift by using a pulley to suspend the weight by two strips of chain instead of just one. Draw a pulley setup that would allow Daedalus to quadruple its lifting power (hint: you can use more pulleys if you want).

1. A rocket ship is shooting straight up at 40 meters per second. Its mass is 1,000,000 kilograms. How much power are the engines producing? Assume that the rocketship is near the surface of the earth and ignore air friction.

2. Let’s say that our contraption Daedalus can produce 2 watts of power. We’re going to try to lift a 200-gram weight using the first setup (with the weight simply hanging from the motor unit). The motor unit reels in 100 links per minute. Each link is 2.5 centimeters long. Is it going to be able to lift the weight? What is the maximum it can lift with the first setup? What is the maximum weight it can lift with the second setup?

Method: Figure out how much power is required to lift 200 grams at 100 links per minute.