The Tortoise and the Hare

Think you know the story of the Tortoise and the Hare?
Then pick a race winner from this mismatched pair! 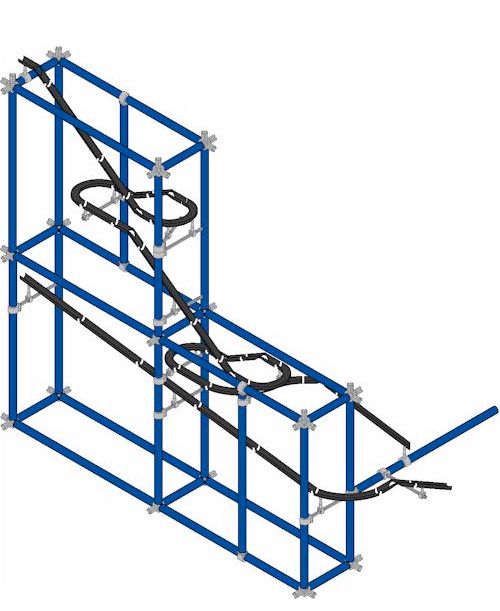 Now work on the Hare course. The track for the bottom half of the hare course connects like this. Since all the turn pieces go around a vertical tube, you’ll have to assemble them in place. Then you can connect them to the flex-track and the long straight track. 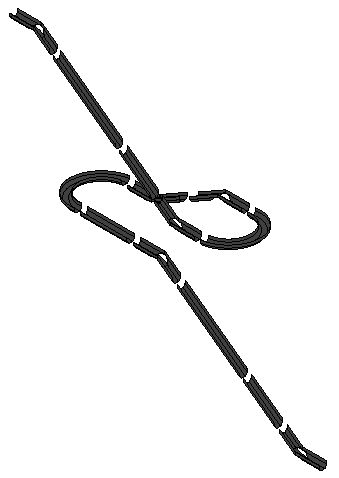 Test the turns on the Hare course. Place a ball on the flex-track just above each set of turns. If the ball sticks, try raising or lowering the adjustable ball joints that support the turns.

You’re done! Place a ball at the top of each course, then let them go at the same time.

What Happened and Why?

What slows the ball down? Friction. This force tends to slow just about everything down.

What speeds the ball up? The constant pull of gravity. As you may remember, gravity is one of the most important forces in the universe. If you decide to become a physicist, maybe you can be the one to figure out exactly what makes it work.

What slows the ball down? Friction.

What speed the ball up? The constant pull of gravity speeds the ball up. As you may remember, gravity is one of the most important forces in the universe. If you decide to become a physicist, maybe you can be the one to figure out exactly what makes it work.

You can use what you learned while building The Tortoise and the Hare to make your own projects even wilder and crazier. Try adding a few double 180-degree turns. They take tinkering, but they’re pretty cool. Just imagine what a few extra turns can do….

1. Both courses can end over the vortex. The first ball to drop through the vortex’s hole wins.

3. Add the chain-lift (and a little bit of track up to) to make a big, endless Famous Race.

Historians gave a man named Aesop credit for creating the fable, “The Tortoise and the Hare’. Aesop was born around 620 B.C. and spent most of his life as a slave. Legends say his second master freed him because he admired Aesop’s quick thinking and keen sense of humor. Another legend tells how Aesop saved a king from being overthrown by telling a fable. The fable was “The Frogs Asking for a King”.

Do you think it is possible to alter the course so that the hare can win the race? Try to do this by adjusting the steepness of the different sections of the track. Remember, your goal is to make the hare faster and the tortoise slower.

Things to think about:

Is there a limit to how fast the hare can go? What determines this limit? (If the hare goes too fast, the ball will fly off the track!)

Is there a limit to how slow the tortoise can go? (Theoretically, no. You can make the track as slow as you want, as long as the ball eventually reaches the bottom.)

Based on this information, try to adjust the track so that the tortoise loses the race!

Let’s talk a little more about gravity, the force that speeds the ball up. We know that if the track is steeper, the ball speeds up more quickly. This makes sense, but what is really going on? And can we explain it with an equation?

The answer is yes! We can explain it. We’ll explain what would happen to an ice cube sliding along the track with no friction. This is similar to a ball, except the fact that the ball rolls. Describing the motion of a rolling ball is much more complicated, but the result is pretty similar to that of an ice cube sliding. 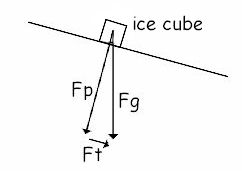 1. List three examples in everyday life where the steepness of a hill determines how fast an object will reach the bottom.

Answer: riding a bike down a hill, a roller coaster, a skier skiing down a mountain, and whatever else you can think of.

2. For each case, will increasing friction speed up or slow down the object?

Answer: In general, friction slows things down. This is because the force due to friction is always in the direction opposite to the direction the object is moving.

1. How steep should the tortoise track be if you want it to be as slow as possible? How long will the ball take to reach the end of the track in this case?

Answer: Make the track completely flat! Then the ball will never reach the end.

1. How steep should the track be to make the perpendicular force equal to the total force of gravity? How fast will the ice cube accelerate in this case?

Answer: Make the track perfectly flat. The ice cube won’t move at all.

2. How steep should the track be to make the parallel force equal to the total force of gravity? How fast will the ice cube accelerate in this case?

Answer: Make the track vertical. The ice cube will accelerate just as if you dropped it.

3. How steep should the track be so that the parallel and perpendicular forces are equal?

Answer: The track should be at a 45 degree angle to the ground. By drawing a diagram similar to the one above, you can convince yourself of this.