The Way the Ball Bounces

Large or small, where does a ball
Get the bounce that sends it tall?

Items you may need:

1. Build the framework shown below: 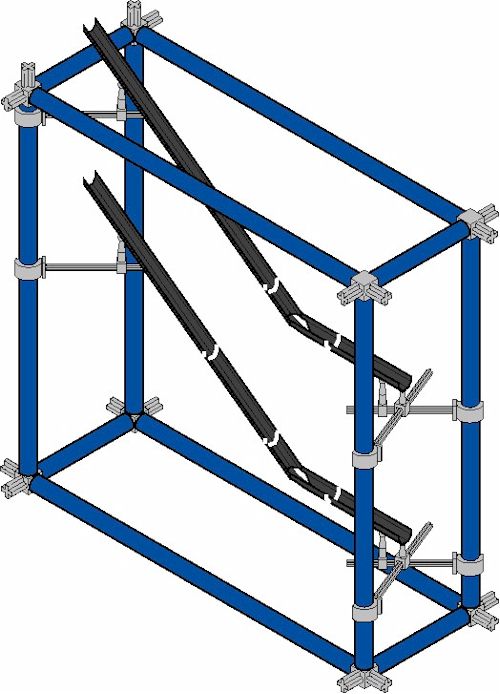 5. Now attach Ramp 2 to the framework in the same way.

6. Adjust the ramps so that they look exactly the same. Use a ruler and a protractor if you want.

7. You’re done building! Now look around. Is this a safe place for balls to bounce, or will you break something if the ball goes flying off in an unexpected direction? Now is a good time to move the framework to a safe location.

8. Now test Ramp 1. Place a ball at the top of this ramp, and release it. Watch where it lands. Put a piece of tape over that spot on the floor.

10. Now set up the yardstick right behind the bouncing surface. You should be able to read the yardstick quickly, to measure how high the ball bounces.

11. You’re done building and are ready to start testing! Ask your friend to place a ball on the same ramp, and release it. Focus on the yardstick, not the ball. How high did the ball bounce off this surface? Record your measurement in the How the Ball Bounces Data Table on the next page, in the column for Ramp 1.

12. Test other bouncing surfaces using the same ramp. Record your results in the column for Ramp 1 in the data table.

13. Now repeat Steps 10 to 12, using Ramp 2. You may need to move the yardstick, the tape mark, and the bouncing surface. If you want, you can leave them where they are and move the framework instead.  Before releasing the ball, try to predict how high each bounce will be. Record your prediction, then your actual results.

What is a bounce?  To a physicist, a bounce is a particular kind of collision, an elastic collision in which the objects that collide with one another move apart after the collision.  Imagine a ball bouncing off a wall.   In this kind of collision, one object (the wall) has quite a bit more mass than the other object (the ball).  So the wall’s reaction force compresses the ball, and when it expands again, it moves in the opposite direction – a bounce!

Predicting what will happen in a collision can be quite difficult.  All collisions depend upon many factors, including the mass of the objects, their velocities (speed and direction), and their elasticity.  That’s why in your activity, you controlled for the mass of the objects (the ball) and controlled for its velocity (by using one ramp at a time to test all of your bouncing surfaces).   Your variable – the factor you want to study – was the bouncing surface itself.

When the ball collides with the newspaper, some of the ball’s kinetic energy (energy of motion) is converted to energy used to squeeze the sheets of newspaper together (and squeeze the air out from between them).  Some of this energy is also converted to heat.  In the end, the pages can be squeezed together by the ball without the paper producing an elastic reaction force.  When the ball collides with the wood, the wood is also temporarily “squeezed together”.   But it produces an elastic reaction force as it expands again quickly, and this force pushes the ball away from it.  In addition, because the wood did not “give” as much as the newspaper, the ball became more compressed than it did when it hit the newspaper, building up a greater elastic force.

If you filled out your data table for several bouncing surfaces, you can now arrange those surfaces in order of elasticity.

You can use what you learned from How the Ball Bounces in your own projects, especially those that include ramps or very bouncy surfaces, like the Trampoline.

1. Choose one surface and try to direct the ball with it by experimenting with its angle. Set up a paper cup or a sneaker as your final target. (In other words, the ball should bounce off the surface in to the cup or sneaker.) Decide how many points for each “basket”.

2. Play the same game with different numbers of points for different surfaces.

3. Use one surface, but keep the final target moving between tries. How many points are you able to score now?

Draw a side view of the expected trajectory of the balls as they fly through the air. What does the curve look like?