What makes the Space Shuttle hurtle itself into orbit at thousands of miles per hour? Maybe you could go ask a rocket scientist. But if you don’t know any rocket scientists, you might want to just go down to your local fire station and ask one of the firefighters. Or down to the wharf to talk to the sailors. What would a firefighter or a sailor know about the Space Shuttle?! A lot. That’s because the Space Shuttle, a fire hose, and a sailboat all work in the same way. Let’s think about it a bit…

The Space Shuttle, like any rocket, works by pushing gasses out its tailpipe straight down towards the ground. A fireman’s hose works by pushing water towards the flames. Thanks to Sir Isaac Newton, we know that whenever you push on something, it pushes right back at you! This is called Newton’s Third Law of Motion. So while the Space Shuttle’s engines are pushing the hot gasses down into the launchpad, the gasses are pushing the Shuttle up into the sky! And while a firefighter shoots the water into the fire, the water is actually pushing the firefighter the other way. The water pushes so hard, in fact, that it sometimes takes two or three firefighters to hold a single hose!

What about the sailboat? Well, its sail works by taking wind blowing in from the side and pushing it towards the rear of the sailboat. The result? The wind reacts by pushing forward on the sail, and the boat goes forward.

We can make it a little easier to see how this works by making a kind of “sailboat” using the Chaos toy. The Chaos trampoline will be our sail, and instead of using the power of a stiff breeze, our sailboat will use the power of falling Chaos balls.

Assemble the “sailboat” as shown below:

This sailboat won’t really float, but it will “sail” across a smooth floor if you put two long tubes down on the floor and then place the sailboat on top of the tubes. Make sure it can move smoothly over the tubes.

It’s pretty easy to sail this sailboat. No tacking, trimming the jib, or manning the tiller. Just take the balls and put them into the basket all at once. Keep your eyes on what happens to the sailboat when the balls start hitting the trampoline! 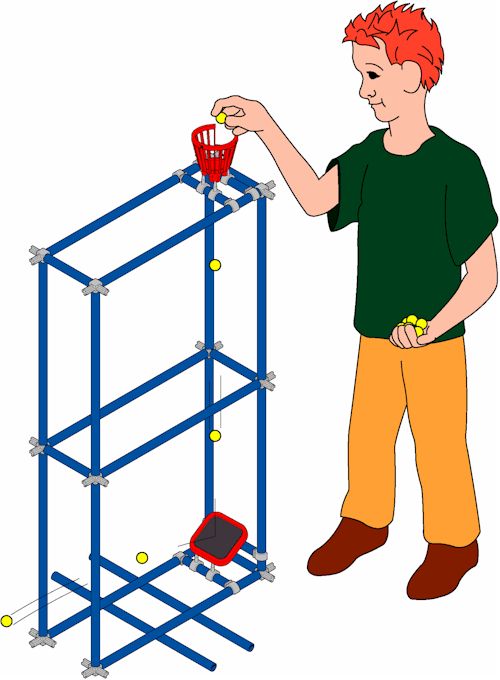 What happened? You should have seen the sailboat lurch forward a little bit every time a ball hit the trampoline. Just like a sailboat takes air blowing in from the side and pushes it towards the rear, our Chaos sailboat took balls falling from above and pushed them towards the rear with its trampoline. As the trampoline pushed the balls to the rear, it got pushed forward at the same time, and the whole sailboat moved forward.

1. Suzy and her friends have been out with on the lake in Suzy’s brand new motorboat all day. It’s getting dark, so they decide to come back to the dock and go home. All of a sudden, only fifty feet from the dock, the motor quits. Too bad Suzy didn’t bring extra gas! How is she going to get the boat back to the dock? She looks around in her boat and notices that she has a huge ice chest full of ice. Fortunately, Suzy remembers something about some guy named Newton and how he said that if you push on an object, it’ll push back on you. She figures that maybe if she throws her ice cubes in the right direction, somehow that will push her back to shore. If you were Suzy, which way would you throw the ice cubes? Why would that help you get back to shore? 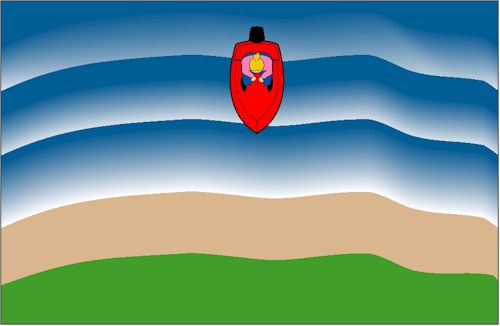 2.Thanks to her clever idea and her super-strong throwing arm, Suzy has managed to get her boat to within a couple of feet of the dock. Now all she has to do is jump off the front of her boat and onto the dock. It’s going to be hard to jump that far, but Suzy just won first place in the long-jump contest the weekend before, so she thinks she can make the jump. Suzy stands on the front of the boat, crouches down, and jumps with all her might towards the dock. Splash! She lands right in the water, and has to swim to shore while her friends laugh at her. After Suzy dries off, she begins to wonder why she didn’t make the jump. She remembers feeling the boat move away from the dock right as she started to jump. So the question is, why did the boat move? 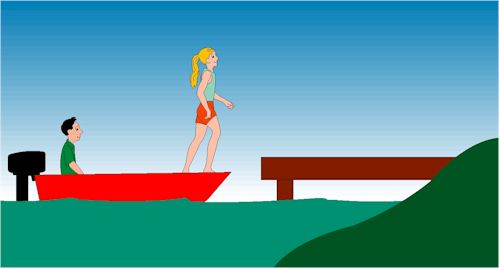 When she jumped off the boat, she pushed the boat and boat pushed back. Basically, they both pushed each other and they both moved. This principle is called conservation of momentum. They each gained the same amount of momentum, but in opposite directions. So the total momentum is zero, just as it was before she jumped when nothing was moving.