Are YOU a Christopher Columbus?

On Aug. 3, 1492 an Italian mariner named Cristoforo Columbo (Christopher Columbus) set sail from Europe determined to cross the Atlantic Ocean and find the riches of the West Indies. He was on a race of sorts: his sponsors, Ferdinand and Isabella, the Catholic Monarchs of Aragon, Castile, and Leon in Spain wanted the rights to the riches of this far away land. It was also well known that the first explorer to reach this destination would claim ownership of the territory and all of the riches that it contained on behalf of his sponsor. Columbus’ personal success relied on crossing the ocean and claiming the territory on behalf of his sponsors before anyone else. The race was on.

On March 15, 1493, Columbus completed his first voyage, having sighted many of the islands of the Caribbean (although he had not found the coveted West Indies). He had won his race, having proven that land existed across the Atlantic Ocean – his prize was the title of “Admiral of the Ocean Sea”, and he was asked to sail again.

Set up your Chaos toy so that it looks like this: 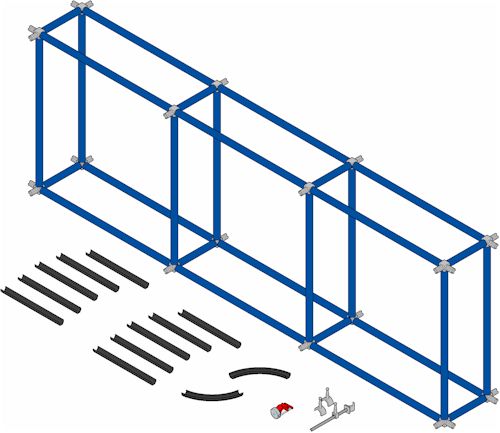 Each participant should gather:

Set up your pieces of track in a way that you think will let a ball span this width of the frame in the shortest time possible. Your track must start at the upper left and end at the lower right. Attach the bell to the end of the track. This will allow you to hear which ball crosses first. You must use all the pieces of track somewhere between the start and finish.

Columbus was faced with the challenge of crossing a vast distance in the shortest period of time. Are you up to the same challenge?

Stage 1: The Physics of a Racecourse

What do you think makes for a fast track? What physics principles are at work in your track?

Newton’s First Law (a body in motion stays in motion, a body at rest stays at rest) says that for the fastest configuration, once the ball starts moving you don’t want to slow it down. The curved track will slow it down! Try putting the curves at the beginning and at the end of your track. Which one crosses the finish line fastest? Why do you think one is faster than the other?

Newton’s Third Law talks about forces and acceleration. Gravity accelerates the ball through the racecourse. Try making the track very steep at the beginning with a long run-out. How does that compare to a track that has roughly the same slope the entire way? Why do you think one is faster than the other?