Lost Energy, Where did it go?

Energy is “lost” all the time. In the morning you eat breakfast to get energy. But by lunchtime you’re starving and tired again. (Well, I know that I am.) When you ride your bike you have to keep pedaling or you will stop. You can’t coast forever. And when you kick a soccer ball it doesn’t roll forever. But in each of these cases, where does the energy go? It’s not like someone is pulling on your bike to slow you down. And does the grass really push on the ball?

We’re going to explore how energy is “lost” and also to learn how to measure the amount of lost energy. Also, we’ll point out that the energy isn’t really lost at all, but is just changed to another form of energy! 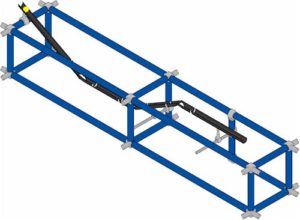 Roll the ball from many different starting points. Find the point at which the ball just barely makes it onto the plateau. Is this point higher than the plateau? Lower? The same height?

This is similar to riding your bike down one hill and up another. If the first hill isn’t at least as large as the second, you won’t be able to coast to the top. Here, the starting point of the ball has to be a little bit higher than the plateau in order to make it. This is because some of the energy of the ball is lost as it travels along the track. Starting the ball higher gives it more energy. This energy comes from the additional work that gravity does on the ball when it rolls a farther vertical distance. Because gravity pulls on it for a longer distance, it goes faster and has more energy.

What causes the energy to get lost? The energy is lost due to friction and vibrations. When the ball rubs against the track, some of the energy gets absorbed. And if the ball makes the track move or vibrate, that uses up some energy, too.

Where does the energy go? That’s a very good question. The energy isn’t actually lost, it’s just changed from one form to another. In this case, the moving energy of the ball gets changed into heat. That’s right, the friction actually causes the track (and the ball) to heat up just a little bit. The amount of heat generated is so small that you won’t be able to feel the track heat up. However, you can convince yourself that friction causes heat. Press your hands together tightly and rub them back and forth as quickly as you can. Can you feel them get warm?

Let’s talk about heat. Why does heating something up require energy? And what exactly changes in a material when it gets warm?

These atoms generally stay together in nice arrangements and don’t move relative to each other. Think of a book. If the atoms in the book moved around too much, the words on the pages would all blur together. This doesn’t happen, though, because the atoms stay in their places. But just because they stay in their places doesn’t mean that they don’t move. They are moving all the time. They vibrate back and forth very fast all the time. The amount they move is so small that you can’t detect it, but they are all moving.

When something heats up, it just means that the atoms are vibrating more and more. It takes extra energy to make the atoms vibrate more, and that is where the energy goes in heating something. That’s how a microwave works. It just gives energy to the water molecules in your food so that they can vibrate more. Isn’t that cool!

The height of the ball determines it’s gravitational potential energy. This is the energy that we have to give to it to lift it up to this height. This energy is

Where m is the mass of the object, g is a constant (9.8 m/s²), and h is the height. Notice that heavier objects will have more of this energy. Also notice that by lifting an object higher (increasing h) we give it more energy.

The amount of energy lost is equal to the difference in the energy of the ball at the two heights. This difference is

Where (hs – hp) is the difference in height.

1. Suppose that two balls of identical size are placed in this track. The only difference is that one of the balls is twice the mass of the other. Which ball would you expect to have the greater velocity? Which would reach the plateau fastest?

Trick question. They should both have the same speed and arrive at the plateau at the same time.

2. Why to racing bicyclists wear spandex shorts and shirts that fit their skin so tightly?

They are trying to reduce wind resistance, which is friction with the air. By wearing tight clothes, they can reduce the amount of energy they lose due to wind resistance. This helps them go faster.

1. A ball with a mass of 1 kg is dropped from the top of a swing set 2 meters off the ground. How much energy does it have when it hits the ground?

The formula for potential energy is U = mgh.

Putting these values into the equation gives

Using the formula U = mgh we can easily see that they both require the same amount of work. One may seem harder than the other, but the amount of actual work is the same.