Surely you’ve noticed by now that if the ball isn’t going fast enough when it enters the loop-de-loop, it won’t make it around. Let’s see if we can figure out exactly what is going on.

Set up a simple loop-de-loop as shown below. 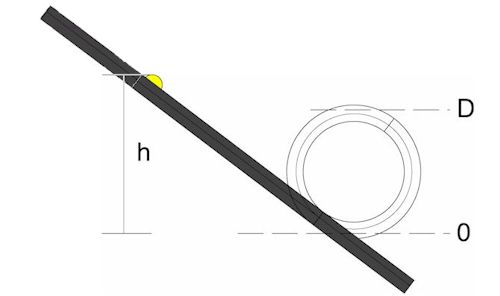 We’ve marked some heights next to the loop-de-loop, with 0 being at the bottom, D being at the top of the loop, and h being the point at which the ball is released.

How high does the ball have to be to make it around the loop-de-loop?

The easiest guess is that it has to be at least as high as the top of the loop. This is actually incorrect, even if there were no friction or other places for the ball to lose energy.

We need to remember that gravity is pulling on the ball at all times. So in order for the ball to go around the loop-de-loop (and stay on the track the whole way around), it must have enough speed that the centrifugal force is at least equal to the force of gravity at the top of the loop. And because the ball is rolling that will take up some energy, too.

Try rolling the ball from different heights and see how high it has to be for the ball to barely make it around the loop.

It can be shown that if the ball just slides completely and doesn’t roll, the minimum height to make it around the loop is h = 5D/4. If the ball doesn’t slip at all and rolls a lot then the minimum height is 27D/20. This is slightly higher because some of the energy goes into making the ball roll. Actually, the ball both rolls and slips, so our minimum height should be between the two if there are no other losses of energy.

Is this at all close to the actual minimum height required in real life? I’m sure you’ve noticed that the track and the loop wobble a little as the ball goes around, even if it is supported well. Any movement of the track will take away a little of the energy of the ball, so the ball will have to be released from a higher point to compensate for that. By measuring how much higher you have to release the ball, you can figure out how much energy is being lost.

Here’s the math for the loop-de-loop:

First take the case where the ball doesn’t roll.

At the top of the loop the kinetic energy must be enough such that the centripetal force equals gravity. Use:

Now let’s include the energy of the rolling ball. I won’t prove it here, but if the ball rolls without slipping, the energy due to the rotation is (1/5)mv².

If we add this energy to the previous problem

So h = 27D/20. Again, this is the minimum value for h if the ball rolls without slipping.