Much of what we know about the world today is built upon the work of Sir Isaac Newton, a scientist who lived in the 17th and 18th centuries. He built upon the earlier work of Galileo to develop laws for how motion works in the world. He summarized his work in three laws.

What does this mean?

It’s pretty obvious that a stopped object doesn’t move unless someone moves it. The second sentence, however, is harder to believe. It says that objects in motion tend to stay in motion unless stopped by a force. Said another way, until someone or something makes an effort to stop them, they’ll keep moving. This tendency of an object to keep moving is called inertia. This is sometimes hard to see in the real world. When you throw a ball, it’s going to stop when it hits the ground, even if it rolls for a while. This is because the air that the ball moves through pushes back on it and exerts a force. This pushing back is called friction. The ground also exerts a frictional force as the surface of the ball rubs against the surface of the ground. Without friction a thrown ball would roll forever.

How can I test it?

It’s easy to test the first part. Set a ball in a stable position. It doesn’t move. If you set it on a hill, it will roll down. That’s because gravity exerts a downward force on it.

Now let’s build something to test the second part.

Why are the curved pieces of track higher on one side?

Although you might not think so, this question is answered by Newton’s first law. You’ll notice that on all the rigid curved pieces of track, the outside edge is higher than the inside edge. This is because when a ball is moving into the curve, it has a tendency to continue in the same direction. The track turns, however, and the ball feels a force from the section of track that it runs against. The inertia (the tendency of an object to keep moving in the direction it is already moving in) of the ball can carry a quickly moving ball over the edge of a normal section of track. The higher walls prevent this from happening.

1. Imagine you are seated at the back of a long bus as it hits a brick wall at 60 mph. There are no people or seats in front of you, just the empty aisle. Oh, and one more thing — you aren’t wearing a seatbelt. 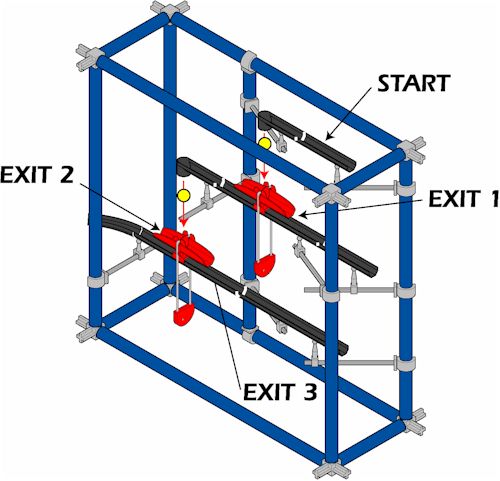 a) According to Newton’s First Law, what’s going to happen to you when the bus hits the brick wall?

b) Why won’t you just stay in your seat when the collision happens?

c) How fast will you be going when you hit the windshield?

d) How would a seatbelt have helped you?

2. Imagine that the Space Shuttle is flying over the Earth like in the picture below. 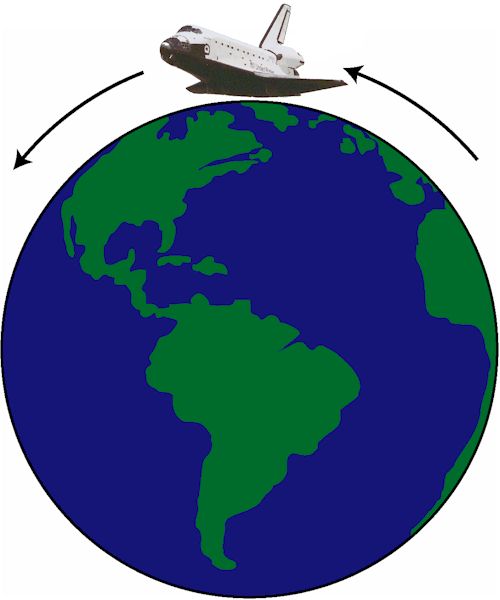 a) What does Newton’s First Law say about moving objects?

b) In what direction is the Space Shuttle moving?

Second Law: The acceleration of an object is proportional to the amount of unbalanced force acting on it.

What does acceleration mean?

What is an unbalanced force and what does it have to do with acceleration?

Where does mass come into play?

Mass is simply the amount of stuff in an object. A car has much more mass than you do. The more mass an object has, the harder it is to accelerate it. You can try this out by going bowling. It’s really hard to throw that bowling ball because it’s so big. Rolling a baseball down the lane would be a lot easier, wouldn’t it? Your arm can only exert so much force on the ball, and the bigger the mass of the ball, the slower it accelerates. The smaller the mass, the faster it accelerates.

How can I test Newton’s Second Law?

One easy way to test Newton’s Second Law is to simply take a ball and drop it. The only force acting on the ball as it’s falling is gravity. Until the ball hits the ground, the force of gravity is unbalanced, so the ball accelerates. The farther it drops, the faster it goes. That’s why it would be very dangerous to drop a ball off of a tall building! By the time it got to the ground, it would be going fast enough to hurt someone pretty badly.

What happens if you put a trampoline under the ball? Well, when the ball first hits the trampoline, it keeps going down. But even though it’s moving downward, it’s actually accelerating upward. In other words, it’s starting to move upward. But it’ll still go down an inch or so before it starts to bounce up again. The reason the ball stops falling and starts going up is that the trampoline exerts an upward force on the ball which is stronger than the downward force of gravity. This means there is an unbalanced force pointing upward. Then, once the ball leaves the trampoline, even though it’s moving upward, it’s actually accelerating downward. In other words, it’s starting to move downward. That’s because the

only force acting on it is gravity, which is pulling it downward.

3. Carl the cart-pusher is pushing his cart along the ground. First, he accelerates the cart at 5 m/s². The cart’s mass is 10 kg.

a) How much force is Carl exerting on the cart?

b) In what direction is he exerting the force — in the direction the cart is moving or in the opposite direction?

Now Carl needs to slow down the cart as fast as possible. The maximum force he can exert by pulling back on the cart is 80 N.

c) What is the acceleration of the cart?

d) In what direction is it accelerating?

4. A ball is bouncing on the ground, like in the drawing below.

a) During what parts of its movement is the ball being pulled down by gravity?

b) During what parts of its movement is it being pushed up by the ground?

d) During what parts of the ball’s motion is it moving upward?

e) During what parts is it moving downward?

f) During what parts is it accelerating upward?

g) During what parts is it accelerating downward?

Third Law: Every force has an equal and opposite force.

What does this mean?

If you push on something, it pushes back on you just as hard. Try it. Go to a wall and push on it. The harder you push, the more force the wall feels. But you’ll notice that the harder you push the more pressure you feel on your hands. That’s the equal and opposite force. In fact, the amount of force pushing back on your hands is exactly the same amount of force that you are pushing on the wall with. Every force in the world has an equal and opposite force.

How can I test it?

You may have seen this trick before, but think about it now with Newton’s third law in mind. Build the following: 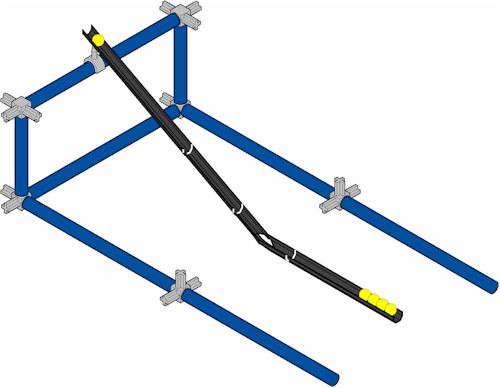 When a ball comes down the ramp and hits ball 1, it exerts a force on it. The equal and opposite force of Newton’s third law pushes back just as hard on the moving ball. That force is enough to stop the moving ball and start ball 1 moving at the same speed. In the same way, ball 1 hits ball 2 and is stopped. Ball 2 transfers its speed to ball 3, and then on to ball 4. In the end, the forward force of the first moving ball was transferred to ball 4, while equal and opposite forces stopped all the other balls.

5. A girl throws her backpack as hard as she can in front of her. 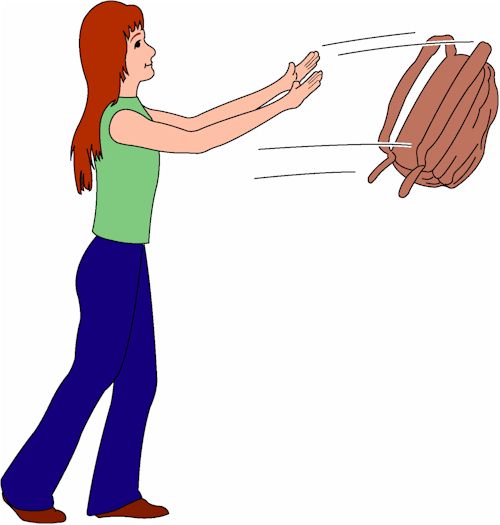 a) If she exerts a force of 25 N on the backpack as she throws it, how much force does the backpack exert on her?

b) In which direction does this force act?

6. Now the same girl puts on roller skates and picks up her backpack.

a) If she throws the backpack in front of her, which way will she roll?

b) If the girl has a mass of 40 kg and she wants to accelerate backwards at 1 m/s², how much force does she have to exert on the backpack?

c) Does the answer depend on the mass of her backpack?