The Trampoline – A way of converting energy and doing work

Many cultures have produced trampolines in one form or another, usually using an outstretched animal skin to throw a person or object into the air. The trampoline as we know it today is based on a prototype built in 1936 by an American named George Nissen. He built it in his garage! Not long afterwards the Air Force and space agencies (now known as NASA) began using trampolines in their pilot training programs.

You’ve probably jumped on a trampoline sometime in your life and already have a pretty good idea of how it works. Basically, you jump on it and the springs stretch and then bounce back and make you go higher and higher in the air. Of course, there’s a limit to how high you can go, regardless of how hard you jump. This is because some of the energy is absorbed by the trampoline. The higher you jump, the more energy is absorbed. Eventually you reach a balance between how much energy you put in using your legs and how much is absorbed by the trampoline. This balance determines your maximum jumping height.

We’re going to use a trampoline to change energy and from one form to another and to also do work on the ball. We’ll see that some of the energy is absorbed by the trampoline (and also the track in this case). 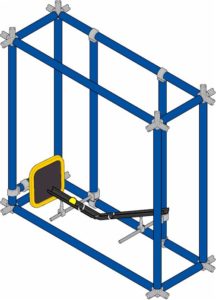 Place a ball at the top of the track and let it go. Watch how it accelerates down the track and then rolls into the trampoline. The trampoline stretches and bounces the ball back until it rolls up the ramp and comes to a stop. However, it doesn’t roll all the way back up to the point where you let it go.

The Physics of a Trampoline

What happened from a physics standpoint? We can talk about what happened with energy, forces, and work in this example. They’re all related, too.

Explaining the Trampoline from Energy Standpoint

How come the ball doesn’t return to its original height?

Good question! The answer is that some of the energy was “lost.” Because of friction between the ball and the track, vibrations of the structure, and energy absorbed by the trampoline, some of the energy is lost along the way. This energy goes into making the structure vibrate and some is also dissipated as heat. It’s not enough heat for any of the pieces to get notably hotter, though, so you can’t detect it.

What are the forces that act on the ball throughout this experiment?

How much does the energy of the ball change and how does this relate to work?

This is a really interesting question, because if there were no losses from friction, vibrations, or the trampoline, the total energy of the ball would always be the same. Some of its energy would just be changed from potential energy to kinetic energy and then back to potential energy.

What is work, and how does it relate to changes in energy?

You probably associate work with doing schoolwork, washing the dishes, mowing the lawn, or doing some other unpleasant chore. That is definitely work, but we’re going to talk about a different kind of work. This is mechanical work, and it is defined as a force carried out over a distance. So if a box is sitting on the floor and you push it across the floor, you’ve done work on it. However, if you push on the box and it doesn’t move, you haven’t done any work on it. Pushing on the box might make you tired, but unless you make it move, you haven’t done any work on it.

We’ve talked about energy and forces and how they affect the motion of the ball when it hits the trampoline. It’s also possible to use mathematical equations to measure forces, energy, and work.

In some of the following problems, we’re going to ask you to find some numerical changes in energy. We’re going to deal with changes in gravitational potential energy and changes in kinetic energy. To be able to answer the questions you’ll need the formulas explained below.

The change in an objects gravitational potential energy is:

Where mg is the force of gravity (m is the mass of the object and g is 9.8 m/s²).  H is the change in the height of the object.

An object’s kinetic energy is given by:

Where m is the mass of the object and v is its velocity.

These formulas will come in handy for the Stage III exercises!

1.You ride your bike down a big hill. As you go down the hill, gravity makes you go faster and faster. When you get to the bottom you use your brakes to stop. Where did all of your kinetic energy go?

Answer: The kinetic energy was converted into heat through the brakes on the bike. Feel the brake pad – it’s hot!

2.Again, you ride your bike down a big hill and then up another one the same size. You didn’t use your brakes at all, so why weren’t you able to coast all the way up the hill? Where did you lose energy?

Answer: You lost some of the energy to friction between the wheels and axles of your bike. But the majority of it is lost to wind resistance. Remember feeling the wind in your face? It’s fun, isn’t it? But it costs energy!

1. Cathy, 12, and her younger sister Jane, 7, ride the ski lift together to the top of the hill. Cathy chooses to ski a very steep run going straight back to the bottom. Jane skis a very gentle slope that winds around in the forest for 2 miles before reaching the bottom. Who has gravity done more work on and why?

Gravity has done more work on Cathy. This has nothing to do with her path down the mountain, but only on her weight. The work done by gravity is the force of gravity times the vertical distance. They both traveled the same vertical distance, but the force of gravity is greater for Cathy because she is heavier. (We are assuming that Cathy weighs more than her 7 year old sister.)

1. A downhill ski racer weighing 80 kg skis down the entire course without braking at all. The total vertical drop of the race course is 700 meters. How fast would the skier be going at the bottom if she didn’t lose any energy along the way?

This is more than a whole football field in one second! Not only would this be extremely fast, it would also be dangerous. Thankfully, the skier loses some energy to wind resistance and friction between the snow and he skis.

2.  At the circus a man is fired out of a cannon straight up into the air. If the man’s initial speed is 15 m/s when he leaves the cannon, how high will he go? (Neglect wind resistance.)

Answer: At his highest point, all of the man’s kinetic energy will be converted into gravitational potential energy.