Clocks are very important in our lives. People have been making clocks for thousands of years and the developments have been quite amazing. In the 16th century B.C. the Egyptians were using sundials to measure time. Around the same time the clepsydra was invented, which was a clock that slowly filled or drained a container of water to keep track of time. The first recorded use of candles to track time was in the 9th century A.D. by King Alfred the Great of England. By keeping track of how much of a candle had burned, he was able to divide his day up into periods of rest, work, study, and prayer. The hourglass was invented sometime before the 14th century. And the first watches, which were driven by springs, were invented in the late 15th century.

Then in the late 1580s a man named Galileo made a startling discovery. He noticed that a given pendulum took the same amount of time to swing through a small arc as it did a wide arc. He recognized the potential of using this to tell time and began working on a clock in 1641, the year before he died. But it was Christian Huygens, the Dutch mathematician and astronomer, who created the first successful pendulum clock in 1656. This marked a major advance in timekeeping.

Build a structure like this, making sure that the joints between the tracks are oriented as shown: 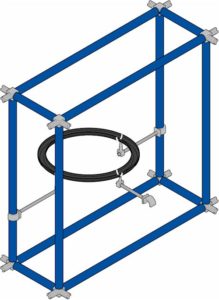 Stage I – What is a Pendulum?

Pendulums really are quite amazing. If you’ve ever seen a grandfather clock, you know that the pendulum goes back and forth once each second to help the clock keep time. But why does it take a second to go back and forth? Why not 2 seconds? The key to a pendulum is its length. As long as the pendulum doesn’t swing very high, the only thing that affects the time it takes to go back and forth (its period) is how long it is. It doesn’t even matter how heavy the weight at the bottom is. All that matters is the length. That’s amazing!

To prove this to yourself, make a simple pendulum with a washer (or other suitable small weight) and a string. 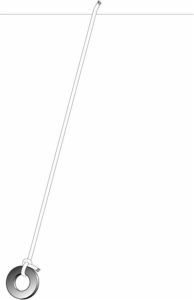 Let it slowly swing back and forth, finally coming to a complete stop. Be careful to hold the top of the string still. Does the period of the pendulum change depending on how high it is swinging? (The answer is no, as long as it isn’t swinging real high.) Change the length of the string and see what changes.

Let’s test our Chaos pendulum. Use the handle to tilt the wheel of track so that it is not quite level. Place a ball on the track near one of the joints between track pieces and let go. Watch the ball roll back and forth, slowly coming to a stop.

Do it again and pay special attention to how fast the ball goes back and forth. It takes the same amount of time to go back and forth regardless of how high it actually goes! This is because it works on the same principle as the pendulum. Physicists call this principle “Simple Harmonic Motion.”

Stage II – Measuring the Period of Our Pendulum

To measure the period (the time for it to back and forth once) all we need is a stopwatch. Also, it’s hard to accurately time just one period, so we’re going to measure the time it takes for 10 periods. Use your stopwatch to measure how long it takes for ten periods. Then divide by ten to get the time of a single period.

Try changing the steepness of your track. How do you think this will affect the period? Take another measurement and see? (Answer: making the track steeper will shorten the period.)

Stage III
Comparison of our Pendulum to a Simple Pendulum

Where T is the period, g is the gravitational acceleration of 9.8 m/s², and L is the length of the pendulum (this is the length from the middle of the washer to the end of the string).

Weigh your washer and measure the length of the string. Plug these numbers into the formula to calculate the period. Now, measure the period and compare to your calculation. Are you amazed at how good the formula works? How does the period change as the oscillations become smaller and smaller?

You can change the length of your string to make the period 1 second. Now you have created your own stopwatch!

One of the most important things to learn about the formula above is that it doesn’t depend on how heavy your washer is!

Next time you see a clock with a pendulum, take a close look at it. You might even want to measure the period of the pendulum. It’s probably either one second if it’s a large clock or ½ second if it’s a smaller clock.

A Mathematical Way to Understand the Chaos Pendulum

The other important thing to notice is that the period doesn’t depend on the mass of the ball. You can make it out of lead or out of plastic, it will be the same!

Measure the mass of the ball (in kg), its radius ( in meters) and the radius of the track (in meters). Put these numbers into the formula and see what you get.

How does this value agree with the actual period of your pendulum? The formula we gave you is really only accurate if your track is vertical, which it isn’t. Because your track is almost flat, the period will actually be quite a bit longer than the formula predicts. Try making the track steeper and see how much shorter the period gets.

A Rigorous Mathematical Derivation for the Chaos Pendulum (VERY Challenging)

Here’s the derivation of the formula used above. It is the most difficult equation to derive of any used in the Chaos activities, and it requires solving a differential equation, so it’s pretty complicated. But try to follow along.

First, it’s always good to look at a diagram of what’s going on.

f = angle of rotation of ball

The main equation we want to use is F=ma, which is Newton’s third law. When we’re working with problems involving rotating objects we can use a similar form of the law which is

Here, T is torque, I is the moment of inertia, and a is d²f/dt². a is the equivalent of acceleration for something rotating. It’s the acceleration of the rotation.

Here we take the center of rotation to be the point where the ball touches the track. Then T= -mgsin(f). I for the ball is (2/5)mr², which you just have to take on faith. If you really want to see that derived, you can find it in any standard college physics book.

If q is small, then sin(q) is approximately equal to q

This is a differential equation whose solution is

So the final answer is

1. George wants to build his own pendulum clock to keep track of time in his bedroom. He wants his clock to be as accurate as possible. Do you think he should make his pendulum long or short? Why?

2. Stephanie is making a pendulum with a string and a weight has a Styrofoam ball and a steel ball bearing. Which would make a better weight for the pendulum?

The period of a pendulum doesn’t depend on the mass of the weight. However, this is assuming that there isn’t any wind resistance. The Styrofoam ball is so light that the air may be able to slow it down quickly. Stephanie should use the steel ball bearing because it is very heavy and will not be affected as much by the air.

1. Sally uses a stopwatch to measure the period of her pendulum. It takes 15 seconds for pendulum to go back and forth 10 times. What is the period of the pendulum?

1. Suppose you have a pendulum made from a string and a washer. How will the following changes affect the period of your pendulum. The choices are increase, decrease, or remain the same.

2. What will happen to the period if you make the following changes to your Chaos pendulum using a ball and curved track?

e)take it to the moon (increase)

3. Suppose you have a simple pendulum made from a string and a washer. The string is 50 cm long and the washer weighs 50 grams. What is the period of the pendulum?

4. If you want to make the period twice as long, how much longer does the string need to be?

The string needs to be four times longer, or 2 meters.

5. If you want the period to be 1 second, how long should the string be?

6. Gravity acceleration (g) is only about 1/6 of the value on earth. How will this affect the period of the pendulum if you take it to the moon?

It will be sqrt(6) times longer.

7. Suppose you have a pendulum made from a ball and curved track. The period of the oscillation is 0.5 seconds. What will be the period if you double the radius of the track?